I’ve gotten a fair number of emails recently and things have been piling up faster than I’ve had time to blog about them; I still have notes lying around for that post about Shelly Mazzanoble I’ve been meaning to write, and I still do want to do a roundup of all of the LoL characters… But these are things that deserve mention, so I thought I’d shove two half-posts together about things I think deserve some attention but wouldn’t ordinarily fill out an entire blog post of their own.

Amusingly, here’s the part where I have to disclose that I do have a sort of tenuous non-connection with Heartbreak & Heroines. Back at a much earlier stage in the game’s development, the author actually originally approached me asking if I would be willing to do the illustrations. At the time I was very burned out on illustration and had several other creative projects that were consuming all of my energy, so I regretfully passed. Still, the concept was interesting to me, so I’m glad to see that it’s close to turning into a finished product.

What is the concept? Well here are some key paragraphs from the Heartbreak & Heroines Kickstarter:

Heartbreak & Heroines is a fantasy roleplaying game about adventurous women who go and have awesome adventures — saving the world, falling in love, building community, defeating evil. It’s a game about relationships and romance, about fairy tales and feminism.

Heartbreak & Heroines is first and foremost a fantasy adventure game. It’s not preachy and it isn’t a textbook about feminism, but it’s written from a feminist point of view. It challenges some of our assumptions about the role of gender in gaming but at the heart of H&H, it’s about being a heroine (or hero) and finding your way to happiness in a dangerous world.

This is the kind of stuff that makes me happy, and honestly the sort of angle that I wish more mainstream companies would at least consider when writing games – telling stories from the female point of view. Roughly half of humans are female, so it does seem to make a sort of sense that one would create games that would explicitly seek to encourage storytelling from a female perspective.

But all of this sounds like crazy-talk to quite a lot of gamers. So, you know, predictably a bunch of people over on RPGnet freaked out about the game and started flailing at strawmen. Because, you know, HOW DARE someone suggest that gaming isn’t the most inclusive hobby out there. And HOW DARE someone have the gall to write a game that attempts to tell stories from a feminist perspective. Didn’t they know that gaming is THE MOST INCLUSIVE HOBBY EVAR? What a bitch.

Anyhow, I could write more about why inclusiveness in RPGs is important, and why RPGnet is (as usual) a wretched hive of scum and privilege, but the fine folks over on The Designer Monologues already beat me to it with a very well reasoned and well articulated post which I hope you’ll go read.

I do want to take a moment here to mention, however, that Heartbreak & Heroines isn’t the first game ever to tackle storytelling from a female perspective. While mainstream RPG companies seem to have their collective heads very far up their asses, indie tabletop gaming offers quite a wide diversity of games that allow stories to be told from pretty much any perspective you can think of. For that matter, while the world of indie RPG design is still a world in which male designers outnumber female designers, you don’t see the kind of tokenism that you do in mainstream game companies.

So specifically I want to mention that if the idea of a game that encourages feminist-friendly storytelling from a female perspective is one that interests you but Heartbreak & Heroines doesn’t seem to appeal to your personal preferences, don’t be discouraged. If you’re into period romances without the fantasy adventure bits, might I recommend Kagematsu as another game that is explicitly designed to tell stories about female characters, albeit with a bit of a gender-bending twist.

And if that doesn’t float your boat, there are so many good indie titles out there by great female designers. I could try to list them, but I’d leave awesome people off the list and that would make me sad, so I’ll just say that as full of fail as companies like Wizards, Paizo, Green Ronin, White Wolf et all are… there’s some good stuff to be had out in indie land. (And bad stuff too – no one’s perfect. But much less bad stuff overall.)

A reader sent me a link to this blog post about Azure Mage over on the official Wizards site. As you might have guessed, the post features prominently the Azure Mage, from the Magic 2012 card gallery: 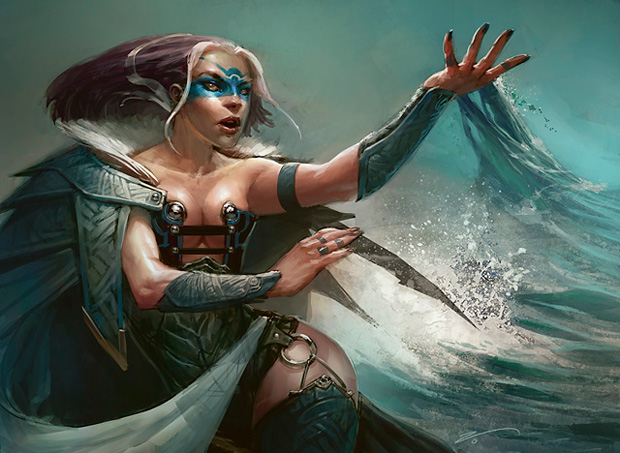 Okay, so clearly the artist has not been reading Boobs Don’t Work That Way. Boobs are sacks of flesh attached the chest, not whatever the hell this guy is drawing. Without a bra, there is no way she would have this much cleavage. Cleavage just isn’t natural without some sort of support pushing breasts together; as sacks of flesh and fat, breasts tend to hang separately. They’re not magically attracted to each other like magnets.

Also, one assumes that those stupid silver buttons are meant to cover her nipples, which is just so very wrong. Nipples are not ON TOP of the breasts, they are generally toward the underside. Another reason her breasts are just plain freakish is her complete lack of areola. With that much exposed tit, we’d be seeing at least some areola – especially as the “nipple-concealing buttons” are in entirely the wrong place to actually conceal her nipples.

Lastly, her rib cage DOESN’T EVEN CONNECT TO ITSELF. Seriously, check this out: 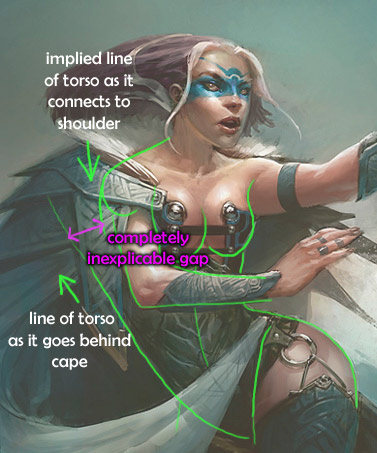 It’s like the artist realized that without a bra, SOMETHING would need to push the two breasts together and then failed to remember that the arm connects to the shoulder, which connects to the rib cage… I mean, it’s not that hard. Remember the song we all had to learn in kindergarten? Maybe the Wizards artists should have to prove they know the song in the first place to get hired on…

So this is bad enough, but I had to laugh at the image that was pointed out to me at the very bottom of the article:

Were they seriously trying to rip off Crapping Frost Mage? I can’t think of any other explanation for this picture. I mean, honestly. As little sense as the Stripper Pole Dancing school of spellcasting makes to me, it at least makes more sense than the Taking a Dump school of spellcasting. Now, admittedly I might be too jaded to be an objective judge of this sort of thing, but I fail to see how this pose would be attractive on any real woman ever. Even her expression makes her look like she’s trying not to crap more than she’s concentrating on mastering arcane forces.

I never thought I’d see the day when Crapping Front Mage had competition for the most ridiculous crapping pose ever, but it looks like that day is here. I guess, this being the internet and all, I shouldn’t be surprised.

86 thoughts on “From the mailbag: Heartbreak & Heroines win, M:TG wtf”