Since the end of the year, I’ve been working on a numerical analysis of my freelance income in 2015 (although admittedly, it did get derailed by real life stuff; I’d been hoping that it would be finished before now). Non incoincidentally, the income I receive through Patreon for this blog is a large part of that.

My Patreon has done pretty well for itself since inception. I started out with 17 patrons in 2014 and currently have 80 patrons – though that’s down from a high of 84. According to data compiled by Graphtreon, as of the time of writing this post my blog is in the 88th percentile of all Patreons by number of current patrons. Still, as well as I’m doing here, it’s sometimes a little hard for me not to get hung up on the number of male-fronted Patreons that are doing… significantly better than mine. And sure – obviously I recognize that a feminist blog about games is much more of a “niche” Patreon than Patreons producing “actual” game content. Still, something I have been quietly discontented about for a while is the fact that Patreon is a platform heavily dominated by men, and it got me wondering – just what are the gender demographics of games-related Patreon creators[1]?

Unfortunately, this is a difficult question to answer, since Patreon’s interface is, frankly, really really bad. To be fair, they are trying to improve on this, but the results so far have been… mixed. So gathering this sort of data required looking to sources outside of Patreon, since I was not able to determine a way to do this using Patreon’s own website.

Instead, I gathered all of my ranking data from Pledge Society – which combines Patreon’s own data with a pretty, actually sort of usable UI. Unfortunately, Pledge Society doesn’t do anything to mitigate Patreon’s awful sorting algorithms, which don’t take into account the different revenue models built into their own site, and makes the rankings that it comes up with pretty useless if what you want is an actual list of “who ranks higher than whom”.

What do I mean by this? Well, the ranking system used by Patreon (and thus Pledge Society) doesn’t differentiate between Patreon’s structured around revenue generated per unit content and Patreon’s structured around revenue generated per month. So to use my own blog as an example, I average between 3-5 paid posts per month, with a nominal pledge level of $170/post (which doesn’t incorporate the diminishing returns effect of monthly pledge caps, but that’s a different can of worms entirely). Logically, my blog outperforms Patreons which only bring in $170 at the end of the month, and yet that’s where it appears in the rankings.

However, in this case, that mix of high and medium-level campaigns in the top rankings actually wound up more useful in capturing a representative sample for two reasons: First, the very top of the top of the leaderboards are even more homogenous than the lower-high-end and the middle of the pack, which still aren’t terribly diverse anyway. Second, despite the different sorting methods, both Graphtreon and Pledge Society are getting their data from Patreon, which does not include gender of creator in its rankings or campaign summaries. So in order to put together the data for this post, I had to go to each individual Patreon page to attempt to determine the gender of the creator(s), which was a stupid amount of extra, incredibly tedious work.

About three quarters of the time, this was all that was needed. Hooray! However, the rest of the time I wound up needing to go to a YouTube channel, or a Twitter account, or a Facebook page, etc. Given how irritating all of that was, I lost patience early on and decided I was only going to do the “top” 200 games Patreons as ranked by Pledge Society, since the inaccurate sorting method meant that I’d get a random sampling of middle-level Patreons sprinkled in. Because NO EFFING WAY am I going to look at 2485 INDIVIDUAL PATREONS. Nope nope nope.

In gathering data, I looked at two things: 1) what a Patreon was producing and 2) the gender composition of its creators[2] – which I recorded as either “male creator(s)”, “female creator(s)”, “mixed-gender group”, and “unknown gender”. You’ll note that there’s no differentiation between solo creators and homogeneously gendered groups of creators. Unfortunately, this is something I regret, however I didn’t think to record solo versus group until I was around #175 or so, at which point I wasn’t about to go repeat almost all of my work.

As for what a Patreon is producing, the categories that I recorded were: games (video games, tabletop games, game settings and resources, game mods, etc), videos (let’s plays, streams, vlogs), podcasts, comics, and other (multimedia, art, reviews, blogs, criticism, etc).

Out of the 200 Patreons that I looked at, here’s how they broke down by category:

Patreons producing video content through YouTube are outproducing Patreons producing actual games by 4%, which was a bit of a surprise. Although reflected in those numbers is an increasing trend of content that would have been delivered as podcasts now being delivered as vlogs or video series – as indicated by the fact that podcasts are making up a measly 3% of the Patreons surveyed. I suspect had Patreon been available five years ago, the proportions of vlogs and YouTube Channels being funded would have been far lower, and podcasts would have been much higher; certainly five years ago[3] it seemed like there were an awful lot of gaming podcasts out there (many of which are now defunct). 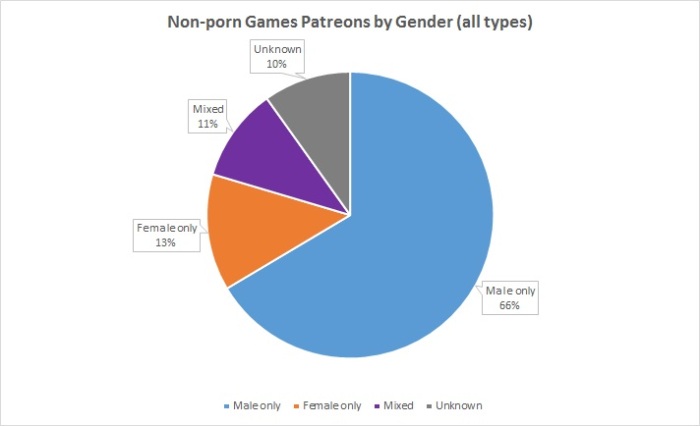 Female-only creator(s) make up only thirteen percent of non-porn Games Patreons! That’s squarely in “just barely better than the MOMA” territory, which is pretty goddamn sad. And creator teams that simply include even just one woman still only bump the total up to 24%! Yikes! Now, yes, it is true that creators of unknown gender account for 10%. However, even if you say that every single one of that 10% of creators is actually a woman (statistically unlikely), that still leaves two thirds of the non-porn Patreons that were examined with no female contributors whatsoever, which is pretty sad.

Things get sliiiightly less bleak when you look at the breakdown of non-porn Patreons that are producing games, although I still wouldn’t start dancing in the streets:

Just under half of Patreons surveyed that are making non-porn games have zero female contributors while fewer than one-fifth of Patreons for non-porn games are controlled exclusively by women. Including mixed-gender teams gets the distribution much closer to half, but again these numbers are belied by the fact that in mixed-gender teams of creators with more than two people, the women were always outnumbered, usually rather significantly. (Again, something I’m kicking myself for not recording actual numbers on.)

But wait, it gets worse. The most popular content type provided by the Patreons I surveyed is also the second-most male dominated! 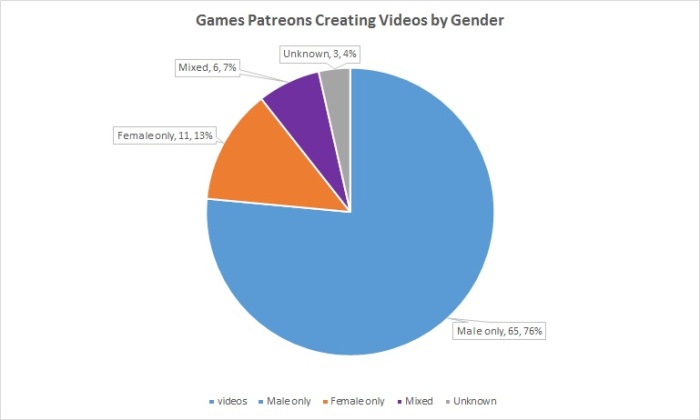 SEVENTY SIX percent of Patreons creating video content have zero female contributors, while only a fifth have any female contributors at all! Unfortunately, it seems that as Let’s Plays continue to expand in popularity as an entertainment trend, the people actually getting paid to produce that sort of content are… pretty well all male.

But even seventy six percent is still better than zero, which is how many Patreons producing podcasts featured any female contributors:

Yup. That’s a thing that happened.

As for comics, they look downright egalitarian by comparison.

Hooray! Fifty percent of Patreons for comics feature content by women! Except, the sample size is pretty absurdly tiny, so I’m pretty sure all I did for this one was make a pretty chart. Oh well.

Lastly, the “other” category, which encompasses art, conventions and events, reviews, criticism, etc. This is the hardest to gauge, because it has the highest proportion of unknown gender creators: 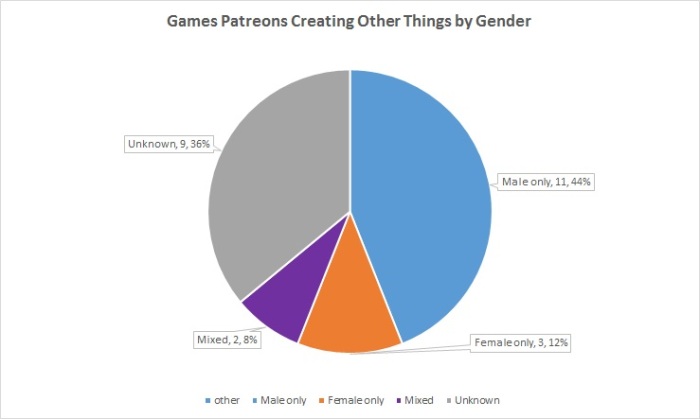 Whichever way you look at it, though, it’s impossible to deny that the gender imbalance on Patreon in its games-related content is pretty staggering.

[1] It’s worth pointing out that the thesis of this post completely ignores the overwhelming whiteness of games-Patreons, which reflects the overwhelming whiteness of the games industry itself. However, while using names, bios, videos, and profile pictures to make judgements about gender presentation is itself (at the very least!) venturing into problematic territory, it is impossible to use these same methods to determine anything useful about a creator’s racial or ethnic identity. As such, I figured it was best to not even try.

[2] I know that my data falls into the gender binary trap, which is problematic and can be erasing of trans and nonbinary gender identities. And I acknowledge that that sucks! However, I feel strongly that looking at the gender imbalance of crowdfunding platforms like Patreon is important, so this is where I simply acknowledge that “hey, this thing I’m doing is still a bit problematic but I didn’t know how to solve that problem”.