I’ve been playing Hearthstone lately and rather enjoying it. It gives me a quick casual gaming fix, I don’t really feel compelled to play even when I don’t have time, and given that I’ve been getting into playing more Magic lately, I just really like the gameplay. So like many, many other people, when the new single-player Naxxramas expansion was released yesterday, I downloaded it and took it for a spin.

I only had an hour to play, so I didn’t manage to get through all the new content, but I enjoyed what I did unlock, for the most part. It was challenging and fun getting a look at some new and very different deck types. But I had a moment early on in my playthrough of the new stuff that made me stop, sigh, shake my head, and say “yup, this game wasn’t meant for me all right”. It happened right after I defeated Normal Boss #1 and started a match with Normal Boss #2, Grand Widow Faerlina: 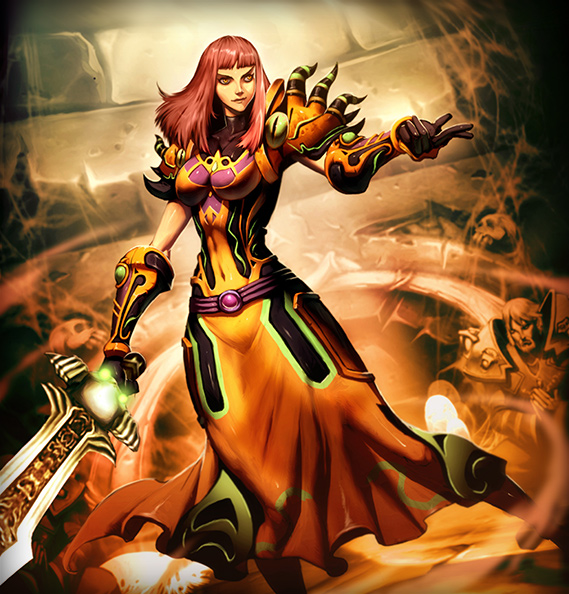 Now, sphere boobs aside, her anatomy isn’t actually that bad. The only (hah) problem is her… armor? …dress?

Honestly, I don’t know what the hell to call it. Given the level of detail we can see on her boobs, collarbone, abs, and belly button, she’s wearing vacuum-sealed spandex at best and at worst is wearing body paint and nipple pasties. (Since I don’t, thankfully, see any visibly erect nipples. Thank god for small mercies, I guess.)

Even more ridiculous is the fact that she is wearing gigantic shoulder plates and bulky gauntlets and… no other substantive armor – I’m not counting the decorative armor plates on her skirt. But while we’re on the subject of her skirt, what the hell is up with the visible panty lines?? Or her knees, which somehow got the skirt vacuum-sealed around them sufficient to define the anatomy of her kneecaps, while the rest of the skirt is simultaneously flowing free?

Honestly, this is the most extreme case of “draw naked, add clothes with extreme reluctance” that I’ve seen in a piece of WoW art in quite a while. And since we’re talking about Blizzard, that’s saying… a lot. And it really, really bugged me.

I play Hearthstone because it’s fun and it’s free, and I like free. When I play, I just want to kill some time and have fun with a game that gives me strategic gameplay in bite-sized increments. What I don’t want is to continually have my fun disrupted with visual reminders of how very few fucks Blizzard gives about female gamers like me. (Hint: the answer is none.) Some days, getting past the bullshit and having fun is harder than other days.

Of course, it took me a while to get into playing Hearthstone, despite the positive reviews of friends and the free. (Did I mention that I love free?) Mainly because all of their promotional material that I saw used this artwork: 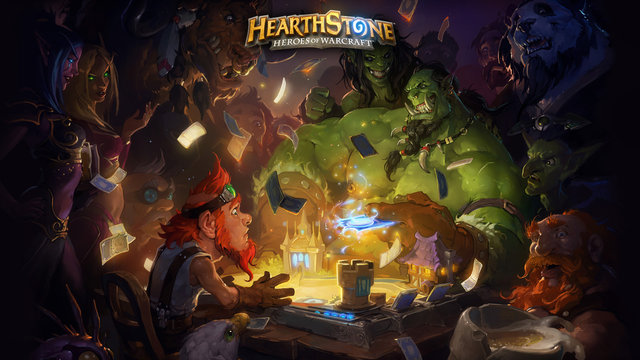 The interesting/pretty binary strikes again. Notice how it’s two dudes playing and the only women (three in a scene of 13) are just watching admiringly. And sure, there are men who are just spectators as well, but an awful lot of the banner ads I saw were cropped down to just Muscles McDudeOrc and Cheerleader McLadyOrc, which distills the awful in this picture down to its purest form. (Also, is Cheerleader McLadyOrc even wearing clothes? I’m not convinced that she is.)

Sadly, even with a meager 3 out of 13 figures being women, the above promo image is actually more inclusive of women than the actual hero selection (albeit by a mere 1%), where only 2 out of 9 hero characters are women: 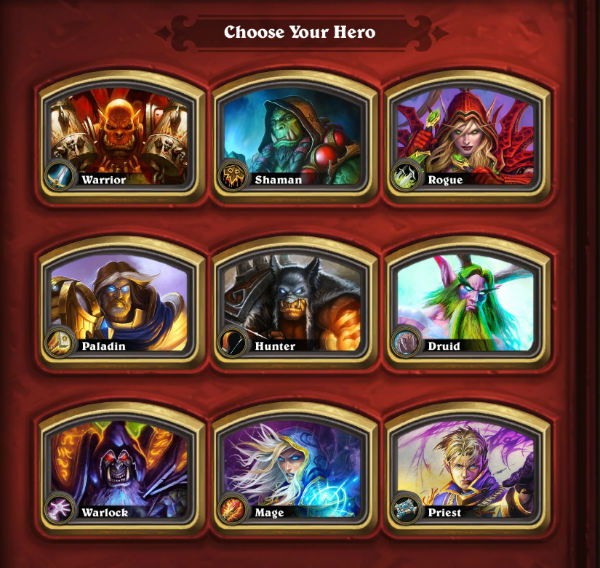 Now because it’s not immediately apparent how awful the art is from these partially cropped icons, here are the images that these icons are taken from: 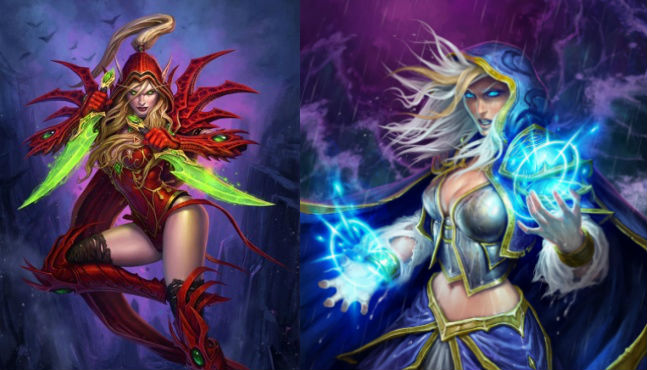 Great. So we have Valeera in her ridiculous cleavage swimsuit with spikey armored shoulders and boots, and Jaina, who… who… I don’t even know what is going on. It looks like she’s casting a boob-enlargement spell, only it’s backfired and they’re about to explode out of her top. Literally. 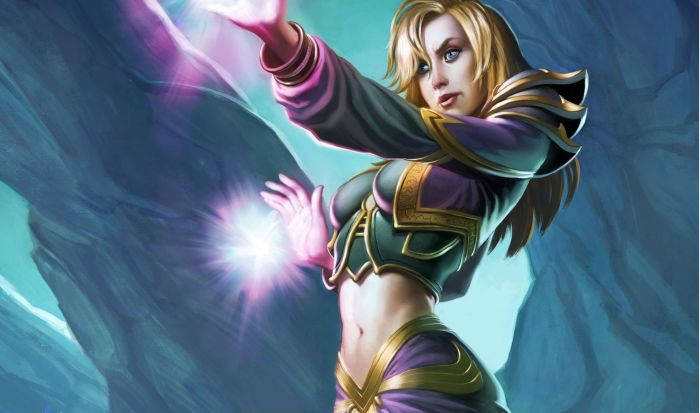 So her mirror images are actually not nearly as crappy as her hero avatar, which is… strange. We’ve still got broken spin, chest TARDIS, and vacuum-sealed sphere boobs. But, you know, at least her boobs aren’t about to explode? Yay?

The funny thing is that in the initial mental outline I had for this post, I was going to make a point about “ugh why couldn’t they just use not-shitty art of Jaina”? Until I realized… there isn’t any better art. Mirror Image Jaina is about as good as it gets, for awful values of good. Seriously, these two were the “best” images of Jaina I could find (not counting WoW screen caps): 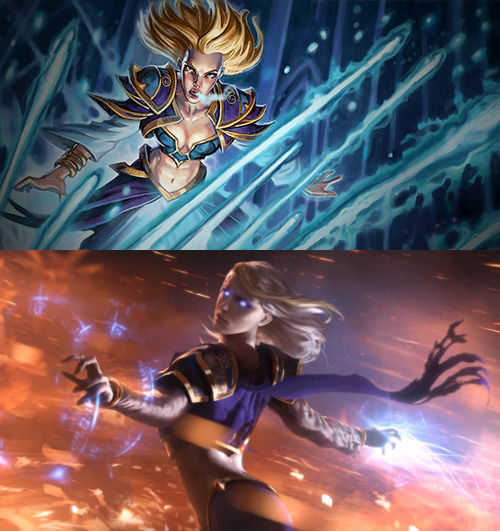 So that sucks. Especially given that my best deck right now is a mage deck, which means I spend an awful lot of time staring at Jaina’s stupid exploding boob cleavage.

Unfortunately, things don’t get much better when you look at the actual cards themselves. (I really should do a numbers breakdown of all of the current Hearthstone cards by gender and other factors, but that’s a bit more involved than I have time for at the moment.) There aren’t very many women featured in the card art, but most of the women who do appear are pretty fucking terrible. Here are some of my least favorite examples, most of which are taken from common or basic cards. (The Scarlet Inquisitor and Ice Block are rare) 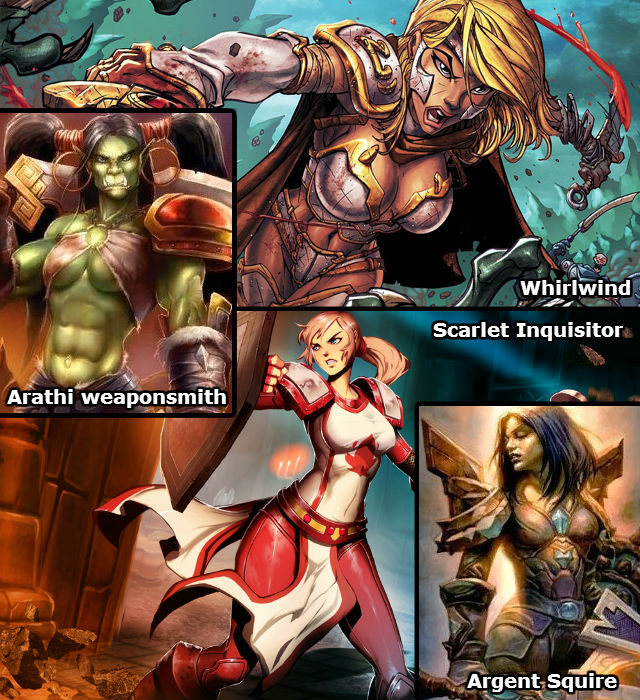 But then I couldn’t find more than one piece. I mean, I guess the Novice Engineer and Reckless Rocketeer are okay. But they both still have stupid cleavage. Really the only piece of art of any woman that I’ve seen and said “cool” and didn’t feel compelled to eyeroll about was the Violet Teacher: 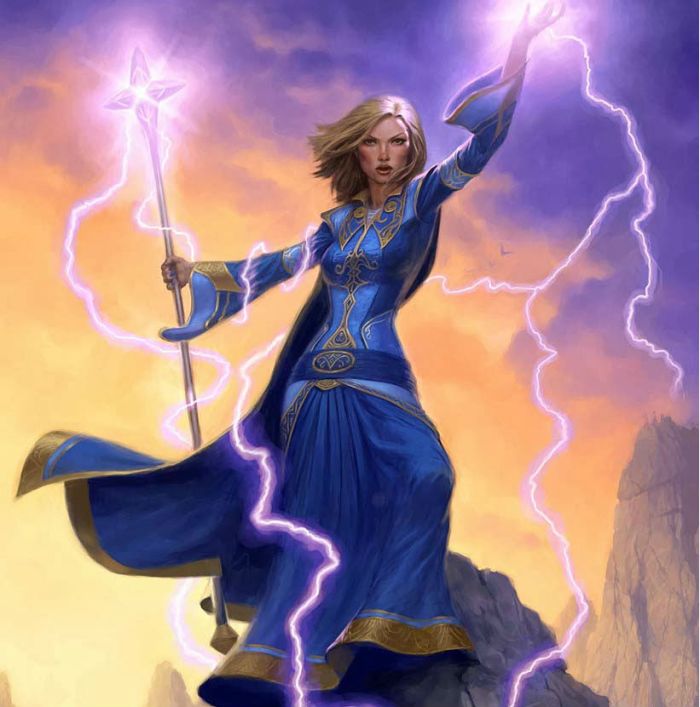 So at least one artist at Blizzard doesn’t have their head entirely up their ass when it comes to drawing women. I guess.

Well, this week was an interesting week for sexism in e-sports, with organizers for Finnish e-sports tournament Assembly deciding to ban female players from its Hearthstone tournament. When asked if this was a translation issue, Assembly clarified that female players were indeed not allowed to compete – but that’s because it was a qualifier for an IeSF tournament, and the IeSF didn’t allow female competitors because they were trying to get e-sports to be seen as a legitimate sport.

Not surprisingly, this upset a lot of people. (Ben Kuchera is kind of a tool, but I feel like he did a good job of capturing my sentiments about this in this particular instance.) Happily, the internet backlash, as well as Blizzard “reaching out” to the Assembly organizers actually had an effect! The Hearthstone tournament is now open to all genders!

But the IeSF would still like you to know that they hadn’t intended for their incredibly sexist gender segregation policy to be sexist. 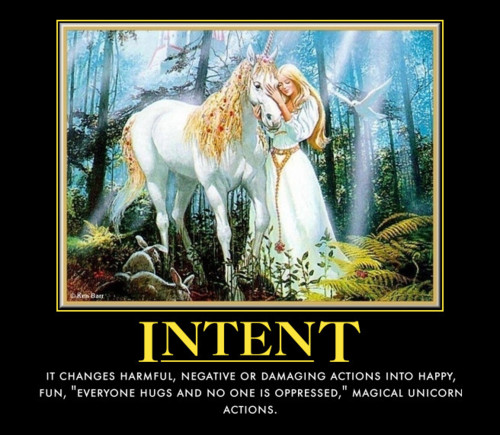 This post on Escher Girls reminds me of the many reasons why I hate Kotobukiya and why I’m STILL pissed about their Liara and FemShep figurines.

The creator behind Empathise This was kind enough to contact me asking if they could link to this blog. They do a lot of great stuff like this about women’s experiences in gaming, so maybe head on over and share some love?

There’s been a lot of controversy brewing lately over The Mary Sue’s recent merger with Geekosystem. Bad enough that they’re removed a lot of the female-specific branding and are no longer calling it a space for women (an “inclusive” space is NOT the same thing as a space for women, it’s just not). But the former head of Geekosystem, now one of the lead editors of TMS, Glen Tickle is… well… a sexist douchebag.

Jill Pantozzi, TMS’ editor-in-chief made this post that completely failed to allay the concerns of long-time TMS fans, which included a totally weak-sauce not-apology from Glen Tickle. (“I was upset because people were mean to me”? NOT AN APOLOGY.)

There are some really great breakdowns of the timeline of events and why this all sucks so very hard, for the interested. Personally, I’m not going to unfollow TMS’ tumblr, but I won’t be visiting their main website. I’m not willing to give them any ad revenue until they get this nonsense straightened out.

The new edition of D&D is out, and the basic rules are available free online! I had a whole collection of links, but honestly so much crap has come up, good and bad, surrounding this release that I think I’ll be saving that for a future post.