Recently, my brother sent me a screenshot from a MOBA in development – Paragon – of a female android character named Muriel. When I saw it, I promptly headdesked: 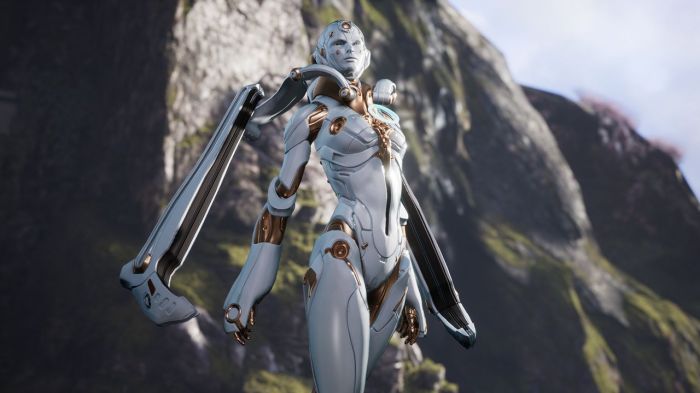 I was furious. Furious! ROBOT CAMEL TOE?? THIS IS WHY WE CAN’T HAVE NICE THINGS! Which is what I yelled at Twitter, only to be promptly reminded that Mass Effect had gotten there previously, with EDI – a fact that I had forgotten because the very first thing I made EDI do was PUT ON SOME GODDAMN CLOTHES.

That got me thinking about female androids, and video gaming’s problem with wanting them to always be fuckable. So I started doing some digging, and Wikipedia handily provided me with a list of fictional female robots in video games! Huzzah! A lot of them I had heard of, but there were a lot that I hadn’t, and… jeez. Some of them are really bad. I struggled for a bit on how to actually present what I came up with, until I just decided to arrange them all in chronological order. So I plunked my screenshots into Illustrator and promptly… uh… got a bit carried away:

(Note that some results from the Wikipedia list have been omitted. I chose not to include characters from visual novels, since those feel like their own distinct thing. I also, FOR THE LIFE OF ME, could not find any screenshots of the character from Doreamon worth using.)

Now because this is me, while I was staring at all of these screenshots of (mostly) incredibly sexualized character designs, I started wondering exactly how I could quantify “bad” for the purposes of determining the overall level of badness. After all, when going through the Female Armor BINGO, a lot of the points like “how does it attach” or “almost naked for an adventure in a cold climate” don’t really apply to characters that are robots. So instead, I compiled a “hierarchy of sins” (to steal a term from Dogs in the Vineyard) of sexualization, starting with things that represent not being sexualized at all (“Nonhumanoid”, “Humanoid, fully covered”) and going all the way to totally objectified (“actually naked”, “camel toe”).

Then I went through for each character I plotted on the timeline and counted the highest criteria that they met on the “hierarchy”, at which point I made some loose categorizations to see what would happen, and I got this:

I realize statistics don’t mean as much when you invent the criteria and kind of half-ass the definitions, but two thirds of the designs counted are at least moderately sexualized, and only 18% of the designs weren’t sexualized at all. So, you know. SURPRISE! Most female android characters in video games are sexualized! What a shock!

Next time, I’ll write about something equally surprising. Like, character creation in RPGs is important, or video games require an input device in order to play them.