[This is the first post taken from things I’ve said elsewhere in the intervening time between shutting down GMMaS in 2016 and relaunch. In this case, this is taken from a Twitter thread on whiteness, edited to add back in grammar and proper spelling. I might post one or two more while I’m recovering from GenCon, but I’ve got three pages of scribbled notes about things I want to write. So – until then, enjoy.]

Hello, fellow white femmes, women, and AFAB enbys. Call-in time. Pull up a seat. Today, we’re going to talk about exclusion, and how whiteness teaches us to prioritize our feelings over the well-being of people who experience either more or different marginalizations than we do. 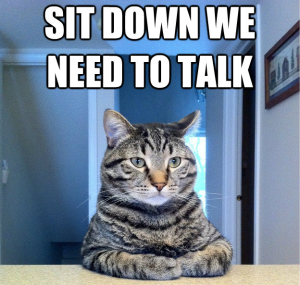 So being someone who’s not a cis dude in patriarchy sucks, yeah? It means feeling excluded – be it from representation in media, representation in government, or simply exclusion from social groups, professional organizations, or opportunities. And it SUCKS. Being excluded because of gender sucks. Which is why a lot of feminist language centers around “inclusion” as always good and “exclusion” as always bad. Our goal is always to create inclusive spaces, not exclusionary spaces. We internalize that exclusion is bad, because we’ve felt the pain of exclusion.

As white people, society has trained us to center our own feelings at all times. Even the “wokest”, most progressive of us who have worked to unlearn this programming still do it. And we lose sight of the fact that feeling excluded ISN’T ALWAYS BAD. As not-cisdudes, we get frustrated about cisdude entitlement, yeah? Why do cisdudes feel entitled to literally Every. Space. And why can’t they understand that a safe space requires excluding people who look like our oppressors, even if they’re One Of The Good Ones?

We roll our eyes at entitled cisdudes whining about being excluded, because we should. Because their feelings of exclusion say more about their entitlement and privilege than anything else. And because their hurt manfeelings don’t obligate us to violate our boundaries.

Us white notcismen can still get pretty fucking entitled to shit and spaces that aren’t ours. We get bogged down in all of the times when feeling excluded is bad and forget to be self-aware that sometimes we’re feeling excluded because of privilege and entitlement. As a white person, if I feel excluded by a group or product that features only PoC, that’s on ME for feeling entitled to representation in that space. The same goes for any other marginalization that others experience and I don’t!

The more majority groups you belong to, the more likely you are to center yourself and your own experiences of exclusion – at the expense of being an ally to people who are more marginalized than you.

And it’s okay to have those impulses! We’re all works in progress. But if you can’t or won’t get past the impulse that EVERY instance of you feeling excluded is Bad and Wrong, then you’re engaging in White Feminism, because your goal isn’t to make sure that all people are included. Your goal is only to see yourself included. 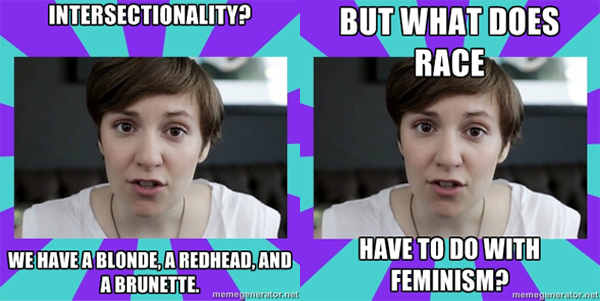 So white notcismen, we NEED to get self-aware about this shit. When you find yourself getting angry over feeling excluded, take a second to STEP BACK and ask yourself:

If, say, you’re a cis person who is being excluded by notcis folks who are trying to create a space that is safe from cis nonsense, then the outcome of that exclusion isn’t harmful to you, so that would be a case where you need to sit on those feelings and keep them to yourself. And, look. Sure. There will be just as many, if not more, times when you’re being excluded by shitty dudes because patriarchy. Patriarchy sucks. But patriarchy goes hand-in-hand with white supremacy, and we have to stop advocating for our rights on one axis while oppressing on another axis.

If you take nothing from this, white folks, take this: SOMETIMES OUR EMOTIONAL PAIN AND DISCOMFORT IS GOOD, BECAUSE UNLEARNING PATRIARCHY AND WHITE SUPREMACY IS PAINFUL.

I say all of this as someone who grew up conservative Catholic in the Midwest, okay? I speak from experience. I won’t claim to be perfect at this either. But the past few years, as I’ve drifted further out of the mainstream – from cishet to cishet-by-default to ace biromantic genderqueer nonbinary mentally ill neuroatypical person – I’ve become more and more aware of the ways in which white people fail to ally.

So. Let’s do and be better, white notcismen, okay? Our pain is real, because patriarchy sucks, but not everything needs to or even should be about us. And making room for others who don’t look like us means taking up less space, which can be painful at first, and that’s okay.