Skip to content
HomeKickStarter Part 1.5, by way of the #Feminism anthology, nano-games, and gate-keeping

[Before I start: I know that I said I was going to come back and do the second part of my look at the gender breakdown of KickStarter campaigns, and I really am! But what I wound up writing about here felt very germane to that post that I am going to write, in that writing this felt like laying the groundwork for that.

Also, I reference A LOT of names and specific games, but if you’re not involved in the world of indie tabletop, don’t let that put you off. The sorts of bullshit identity politics I’m talking about exist in ANY scene.

ETA: The first version of this post got completely fucked up by wordpress. I fixed it as fast as possible; many apologies to those who saw it in its accidentally unfinished state.]

First: #Feminism and why it’s cool

Last week was Dreamation, which I went to for the first time this year, and it was an amazing experience. There were SO MANY [women and visible minorities and visibly queer folk] in attendance that it felt really wonderful and safe and welcoming.

One of my favorite things that I got to experience while at Dreamation was #Feminism, an anthology of feminist nano-games that was funded through IndieGoGo and (so I hear) will be available for sale very shortly. What is a nano-game? Well, to quote Misha Bushyager (the campaign coordinator):

For our purposes, a nanogame is an analog roleplaying game that lasts less than an hour. Our games are for 3 to 5 players, and are playable with simple tools like paper, pens, paperclips, timers, or other things you can find in the bottom of your bag.

Because the games were short, and so many authors of the games were in attendance, they offered a “smorgasbord” of a subset of games from the anthology on the last day of the convention. About thirty people showed up and split into groups and most people got to play two games in a two hour slot. There were so many great games on offer from the anthology that it was difficult to choose!

Some of the games that were there that I did not play: Manic Pixie Dream Girl Commandos – a game that involved a scavenger hunt of sorts that required doing stereotypically MPDG activities. There was a game about the orgasm gap in which you play a couple on a first date (unfortunately the title escapes me First Date). There was another game that was actually a trio of even SMALLER games about breaking down taboos around talking about female anatomy, Mentioning the Unmentionables, the first of which is literally just replacing words in movie titles with the word vulva. (ie Dances With Vulvas, Octovulva, Vulva Wars) Lizzie Stark (who is amazing) was describing the game to me and a friend, and I giggled the entire time out of horrid, visceral nervousness. (Hooray for being a recovering Catholic!)

The two games I did get to play from #Feminism were Curtain Call – a game about the horrifying sexism that women celebrities in the entertainment industry face, and Shoutdown to Launch – a game about gendered interruption humorously disguised as a game about troubleshooting a last minute mechanical problem before a space shuttle launch. Both games were very intense and hard-hitting, and the conversations that were had afterward were important. And playing those two games made me really excited about picking up a copy of #Feminism and playing through the games to see what other interesting and important conversations might be prompted by the other games in the collection!

Which leads directly into…

Gatekeeping and why it’s bullshit 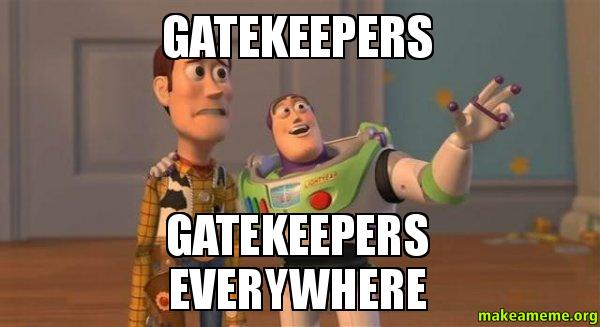 Ironically, the first night I was at Dreamation, I wound up having a conversation with a couple male game designer friends who I hadn’t seen in several years, since they stopped going to GenCon. One of them started complaining about nano-games and how he doesn’t understand why they’re “trendy”. Most of his complaints revolved around format and presentation – Epidiah Ravachol’s Vast and Starlit kicked off a bit of a fad for writing games that could fit on a business card, and it was such a novel idea several game designers were intrigued by the challenge and wrote games with similar space constraints. And sure, the text on Vast and Starlit is hard to read, and yeah, it’s not convenient to refer back to you if you need to clarify something. But using a particular attribute (ie fits on a business card) of a subset of a genre of games (ie nano games) in order to dismiss an entire genre of games? That’s shitty!

In this particular instance, it’s shitty because there are people doing hard-hitting, important work within the format of nano-games! #Feminism is an amazing collection of games! Moreover, that designer’s complaints about format don’t even apply, because the anthology is beautifully presented – large text and headings, very readable, icononography that clearly classifies each game and conveys at a glance what sort of play experience you can expect. (For example, each game has x out of 5 teardrops that are labeled “feels”. PERFECT.) So dismissing work like #Feminism “because nano-games” is doubly shitty because 1) #Feminism is hard-hitting, important, and DESERVING OF ATTENTION and 2) the reason being given to dismiss nano-games (and thus #Feminism) doesn’t even apply.

It’s this kind of behavior such a classic example of the sort of gate-keeping behavior that keeps women’s work from being regarded as “important” or “noteworthy” or even just “worth paying attention to”, which sucks! (And is surprising, given that this designer has a history of publicly butting heads with certain people in the hobby who like to gatekeep hardest.)

Or, to provide another, more personal example… I am a game designer who “only” writes hacks. It wasn’t until recently, with the runaway success of Dungeon World and Blades in the Dark that what I do was even universally acknowledged to be “real” game design. Previous to these games, it was pretty common for people to dismiss hacks as not “real” game design. Hell – I did it to myself; I argued with people who tried to call me a game designer for two years after publishing my first game because I had “just” written a hack. However, since anything that makes $179,000+ on KickStarter (as Blades in the Dark did) can’t possibly not be “real”, the goal posts have since been moved. Hacks are now game design, but designers who write “new and original” systems are doing “better” work, because they are helping “progress the state of the hobby”.

And this is ALSO shitty gate-keeping. Because ANY time you have a person or group of people who believe that they have the ability to draw a line around what work is “real” game design and what work is less valuable, or doesn’t contribute to the hobby, or just plain isn’t game design… Inevitably the boundaries of the space defined as “real” privilege whiteness and maleness, and the space defined as “not real” is where not-white-dudes end up being greatly over-represented. The fact that it took the legitimizing male-whiteness of John Harper, Sage LaTorra, and Adam Koebel to shift that conversation is just the latest example in a long line of shitty examples of white men re-drawing the boundaries of game design in ways that include MOSTLY JUST WHITE DUDES.

So yeah, I get pretty damn annoyed with people who dismiss projects like #feminism “because nano games”, and it’s why I look at games like this. If the author calls it a game, then it’s a game. Period.

Because the existence of spaces like Dreamation, that are wonderful, and inclusive, and safe feeling  does NOT change the fact that tabletop gaming is a hobby with A LOT of shit to unlearn, and women’s work just ISN’T TAKEN SERIOUSLY. And that’s not just my personal bias opinion. You can argue with opinions, but you can’t argue with data, and the data is that 6% of all KickStarters for tabletop games in 2015 were female-fronted but raised only 3% of total revenue. And that’s just one of many statistics that I’ve gathered recently that show how deeply, DEEPLY fucked it is to be a female game designer, let alone a female publisher.

And here’s the thing. There’s no such thing as a game, or a game type, that everyone likes. The importance of #Feminism as a group of games with powerful things to say doesn’t mean that you have to LIKE the games it contains.

Hell, I HATE super-trad dungeon crawling games. Torchbearer and Dungeon Crawl Classics push every single one of my “HOW THE HELL IS THIS EVEN FUN” buttons. But I have friends who do love them, and I’ve even gotten to play a couple of these games with them, and their enjoyment and enthusiasm was infectious and wonderful, and doesn’t in any way invalidate my opinion that I REALLY HATE playing Dungeon Crawl Classics.

Similarly, your personal gripes about nano-games doesn’t in any way invalidate the worth of a collection like #Feminism. And moreover, I might suggest that if your grumpiness about a particular genre of game is leading you to dismiss wholesale a collection of work about the real-world, lived experiences of marginalized people, as written by a pretty-damn-diverse group of people – many of whom are writing from their own lives and experiences? You might be the sort of person who would benefit most from playing a few of the games in #Feminism.

8 thoughts on “KickStarter Part 1.5, by way of the #Feminism anthology, nano-games, and gate-keeping”