My husband and I are board game aficionados, to the point where we actually try not to buy board games; we have a games closet that has already overflowed into basement storage, not to mention the fact that with a toddler in the house we just don’t have the time for board games (or really any kind of games) that we did pre-child. However, the exception to this rule for the last few years has been my yearly trip to GenCon, when Kit sends me with a shopping list of things to acquire – which is how I wound up purchasing Terra Mystica.

It’s not something that I would have purchased on my own; Terra Mystica is a eurogame[1] – which I tend to find hit or miss. (Also, I was annoyed at my husband for making me buy something full of hundreds of wooden tokens that I had to carry around all day. Terra Mystica is HEAVY!) More importantly, though, the art is pretty bullshit. Each of the game’s 12 factions is pictured on the box, and only 3 of 12 are gendered as female. And of course, the female-gendered art is some grade-A bullshit:

Great. So the two choices for the Green faction, which is tied to Forests and is thus the most “nature-ish” are both flavors of breastacular. And of course we have Mermaids, because Mermaids.

This is something that I actually found sufficiently irritating in our initial game (which has a suggested setup for faction selection when you’re playing with people who have never played the game before) that I refused to play female-gendered anything and played the Halflings instead as I didn’t want to deal with having to look at this bullshit cheesecake right in the middle of my damn play mat while I was trying to make decisions about how best to allocate my resources.

Now to be fair, the Witches do almost manage not to be bullshit. The fur bustier is pretty ridiculous, but she’s got a cloak and hasn’t been twisted into some ridiculous pose meant to show off her feminine “attributes”. It really wouldn’t have taken much for the witches to be actually not-terrible, unlike the Auren. She has the stiffest, most rigid breasts that are completely unaffected by gravity, and the drape of her garment only obscures enough to make things even more confusing. Like, where is her left leg? Does she have a left leg? What about her spine? What is it doing? And why is her torso such a perfect cylinder? That’s really not how ribcages work.

Even the Auren can’t compete with the Mermaid, though, who is so very broken that I decided it was time to do a redraw[2], since it’s been a while since I’ve done one of those. Looking at her, it seemed pretty clear to me that the artist had one priority in mind – show her breasts front and center and don’t let anything like “anatomy” or “perspective” get in the way of that.

I realize that the perspective of the pose does make it a bit difficult to tease out what’s going on here, so first let’s start with a draw-over: 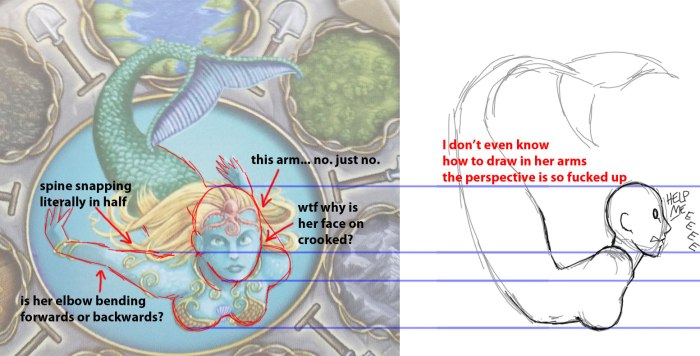 Looking at this, I imagine the artist’s inner monologue while drawing the Mermaid went something like this: “Face. Okay, hot, because no ugly chicks. Also, she’s a mermaid so we gotta see her tits. Arms? Eh, I dunno, let’s just half ass some shoulders and slap some arms on there. I can hide the one arm behind her hair and nobody will pay attention, because boobs, right? And then, I dunno. A tail. Who cares about that, you can’t have sex with that part, so whatever.”

So there are a lot of things that are just flat-out wrong, and all in the name of putting TEH BREASTS front-and-center. First, how about her face, which looks to be sliding down and to the left? Because if she is looking UP and to the RIGHT, her face should not be DOWN and too the LEFT. I know this may seem like a minor quibble, but given the number of factors that seem to point to the artist literally not caring about anything other than her tits…

Her arms are an even bigger problem, and seem to be tacked on mostly because that’s a thing that people are supposed to have, right? At first look, it looked to me as though her right arm was bending backwards, but now I honestly can’t tell which way it’s supposed to bend. I do know that with her upper arm at that angle, that degree of foreshortening on the lower arm wouldn’t be possible, because human elbows just don’t bend in such a way that her arm could possibly be correct. Her left arm is even worse – the artist just hid it behind her hair, waved his hands and said “foreshortening”. Which. No. Given that the hand on that arm appears to be the same size as the hand on her right arm, which is supposed to be much closer to the viewer, there’s no way that foreshortening would account for what is going on with that arm.

The biggest problem of all, however, is her damn spine. In order for the viewer to have that full a view of her breasts and for her tail to be at that angle, it would require actually snapping her spine in half at a ninety degree angle, not to mention that it would also require not actually giving her a sufficient ribcage in which to store vital internal organs.

Now part of any redraw involves actually correcting the pose once the flaws have been pointed out. However, back bends are difficult – sufficiently difficult that I’m turning to pictures of yoga from Wikimedia Commons to help me cheat: 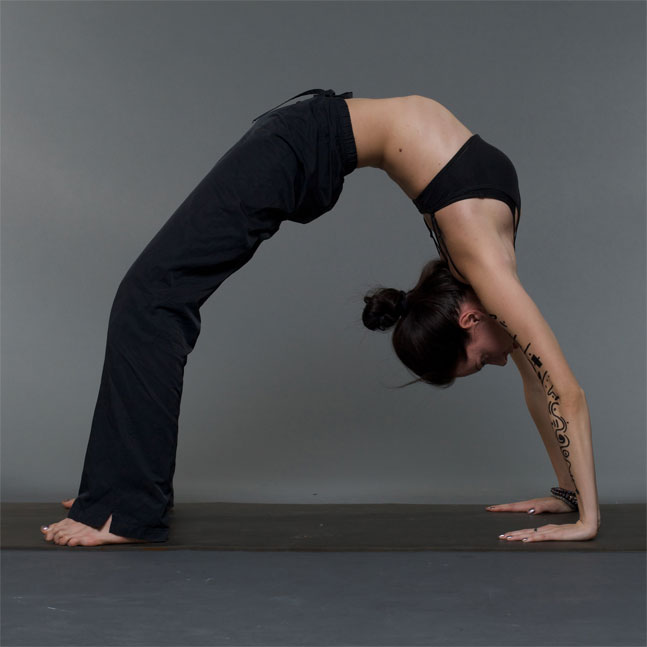 This level of back bend is just about the limit of human bending ability, short of actual contortionism[3]. I happen to think that it’s pretty damn unlikely that a swimming Mermaid is going to voluntarily twist herself into this sort of position while swimming, but it is important when doing these exercises (at least it is to me) to honor the spirit of the pose and replicate it as close as possible.

Now this picture is a side view, rather than a 3/4 front view, but it was still useful as a reference of what should go where, once I flipped it around to the appropriate angle: 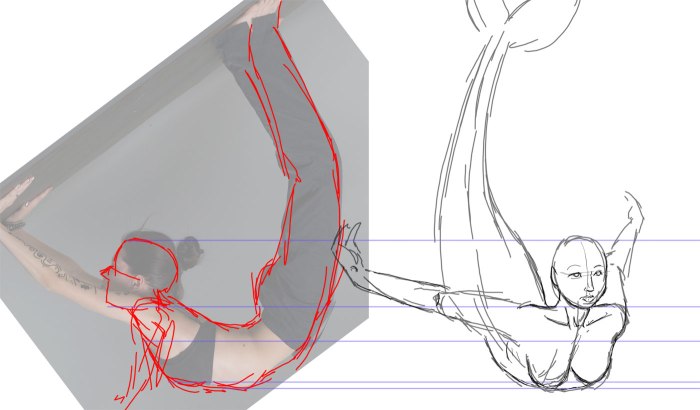 There are several things worth noting here. First, regarding her breasts – when breasts hang – they become elongated and DO NOT retain a spherical shape. Admittedly, water would diminish this effect, but not eliminate it completely.

Second, when her spine is arched properly and NOT snapped in half, you should be able to see her rib cage clearly underneath her breasts. The breasts are flesh sacks hanging off the pectorals, which are attached to the front of the rib cage. They would not completely obscure the thing to which they are attached.

As for her arms, I can’t guarantee that they are totally correct – I would have needed to get assistance in having someone take my picture while I was twisting my arms around in front of a mirror, and as my neck and shoulders haven’t been too happy with me of late I figured I wouldn’t push it. However, while I’m not sure about her left arm (foreshortening is haaaard), her right arm should be pretty close to correct.

Lastly, her tail is where I’m on the weakest footing, given that I know human anatomy but am not not conversant on fish anatomy. Still, it seems that most artists draw the lower half of mermaids as though they were two legs fused with fish skin, so that’s the approach that I have taken – which means that her tail would not be able to fold in on itself to such an extreme degree.

Interestingly, when you look at my redrawn version, it doesn’t look all that much different – sure lots of things have been tweaked but the general structure has been retained, right? Well… Look what happens when I plunk the original pose (outlined in red) over top of the newly redrawn pose: 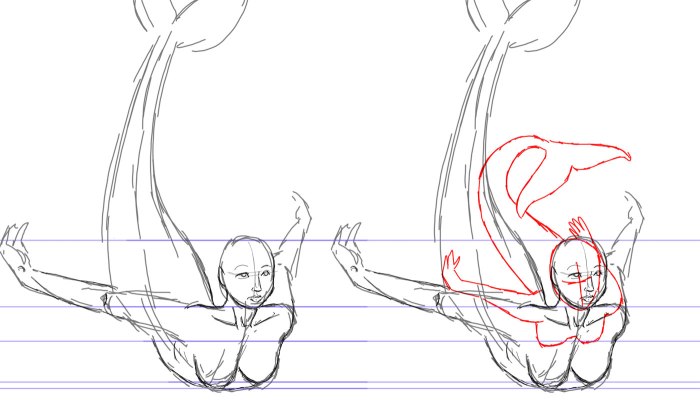 In deciding how to line her up, I made her head the same size as the redraw for the purposes of aligning the two versions. I nearly decided to use her breasts as the point of alignment, but that would have inflated her head to somewhat freaky proportions, so I left it as is. Which really emphasizes how incredibly squished this poor woman was. Anything that didn’t contribute to TEH SEXAY was either an extreme afterthought or completely removed.

Which, you know, call me crazy but if you’re going to sexually objectify women in your game art, can they at least look like real people? Because random assortments of ill-fitting body parts assembled in a haphazard fashion aren’t just unsexy, they’re creepy and unsettling. Which is distracting, when I am trying to figure out how to allocate my SEVENTY BILLION DIFFERENT RESOURCES in order to take my turn.

[1] Hundreds and hundreds of tokens! So many moving parts! Badly translated rulebooks that are confusing to parse! Super-complex strategy!
[2] And of course, having decided this I could NOT find my tablet’s stylus, so this was done using my old monoprice tablet. I apologize for the shakiness of the lines.
[3] As a matter of fact, I do know an actual contortionist who can sit on her own head. It’s weird and I refuse to call that a human ability, regardless of the fact that she is human and can do it. That level of contortionism requires some serious monkeying around with all sorts of stuff that usually does not get monkeyed with.