Skip to content
HomeEven more followup: in which the awful is doubled down

So here’s the story so far, for those of you who haven’t been playing along at home thus far. I did an anatomy correction of a piece of art by Jonboy Meyers. Apparently that made a lot of comics fans really, really mad. So since they found this link, I’ve been enjoying a nice little hate-a-palooza from my least favorite segment of the internet.

Because it’s the way I roll, I then posted a response to all the haterade highlighting the good, the bad, and the stupid. This has had mixed results. I got several new patrons from all this extra traffic (hello, you beautiful, wonderful people, you!) – which is pretty cool. So thanks for all the extra traffic, haters. You actually did me a favor there. But responding to haterade is like kicking a hornet’s nest. The results are eminently predictable and never pleasant.

Now, in my previous post I called out J Scott Campbell and Mark Brooks, who are themselves well-known professional comics artists, as being the instigators of a very large portion of the internet bile that has been rolling downhill in my direction. (I can’t know what portion because the trackback doesn’t break it down any further than “facebook.com”. Thanks for nothing, trackback.) Here, apparently, is what they have to say for themselves.

I’m including transcripts below each image since the screen grabs are hard to read. My comments are inserted bolded in brackets.

Mark Brooks: Hey, look at us! We got picked out in her nonsensical rebuttal! [Because any time you don’t like something a woman says, you can just call her crazy and problem solved! True story.] And now we’re apparently bullies too! I guess when you get any modicum of notoriety you’re not allowed to have an opinion anymore. Go figure. [Come on. You draw comics for a living. “With great power comes great responsibility” ring a bell at all?]

J Scott Campbell: Wait a second… So Mark and I get shrapnel kickback, and [anonymized] get’s [sic] away untarnished…?! No fair!!

[anonymized]: I’m apparently not a big deal like you two, and that hurts.

[Okay, so I know they’re joking here. I do get that. But it’s a little troublesome that they’re willing to brush aside their role in stirring up this flood of bile in the first place as, you know, no big deal. Hey! We’ll just call her crazy! No need to actually reflect on the implications of my actions. Nope! Not at all.]

J Scott Campbell: Again, I made my original post having absolutely no idea of her gender, only that her artistic working knowledge seemed extremely flawed, uninformed and incorrect to offer any legitimate lectures or critiques to working published artists. So if she’s blustering on about this being part of some anti-female bla-bla-bla, I think her argument in [sic] unsound.

[OH MY GOD. “Anti-female bla-bla-bla”?? I’m not making this stuff up for shits and giggles. Sexism in the comics industry is very well documented. READ A BOOK. Or, you know, talk to any woman who’s worked for DC for more than five minutes. Or just tell yourself that I’m just craaaaaazy. Whichever. That works too]

J Scott Campbell: I mostly feel sad for her. She appears to go through life seeing only the bad in other people and their work. Seems like it’d be a tortured existence. And immediately going after mine and Mark’s artwork the very next day only adds to the appearance of her biased and emotional filled knee-jerk thinking that has little to do with legitimate art critiquing, and more to do with attempting to save face. I hope for her sake that she can pull herself out of this self-destructive mindset and work on bettering her own artwork rather than grabbing at fleeting internet fame by tearing down others more successful than her. [Italicized emphasis mine]

Okay. We’re going to take a break from screen caps for a second to respond to that last one in particular.

So, first of all, claiming that I “went after [your] and Mark’s artwork” just proves how incredibly little effort you put into ACTUALLY READING WHAT I WROTE. Here’s what I actually said:

Which. You know what? In what universe is it okay to use your very large platform to encourage your followers to harass someone? Adria Richards and Anita Sarkeesian are only two of the most recent and prominent examples of the effects that online harassment can have. There is a long and sad history online of women being harassed for DARING to commit the CRIME of HAVING OPINIONS WHILE FEMALE.

And for people who’d say “well they didn’t actually tell their fans to harass you”? BULLSHIT. They made posts in which they called me things like “laughable”, “embarrassing”, and “smug”, then continued to encourage the anger in the thread that resulted. Nor did they make any attempts to dissuade potential harassers, or tell people who made threatening comments to back off. These are grown-ass-men who pointed their very large audiences at me and told them what a terrible person I was on the internet because they want me to shut the fuck up.

Going through these threads is, of course, about as pleasant as drinking a tuna and brussel sprouts milkshake, so I’m not going to go through all of the comments that have been made so far. I have better things to do with my time than marinate in internet bile. But here are some highlights taken from J. Scott Campbell’s hate-fest before I got too tired of humanity to continue.

(SEVERAL of whom I should note are professional comics artists. I’m not going to name all the names here, because I don’t actually hate myself. But it is worth asking that HOW is any of this anything resembling professional behavior? But then, given that the mainstream comics industry is happy to regularly re-affirm how much it hates women, I guess none of this should come as a surprise.)

Got it? Okay, so let’s review. Did I say that they were knowingly using their audience to harass me? Yup! I sure did. Did I say that their behavior is unprofessional and imply strongly that it was also irresponsible? You betcha! Did I say ANYTHING ANYWHERE about artwork created by J Scott or Mark Brooks? NOPE. Go ahead. Re-read that. I’ll wait.

And of course, the “I feel so sorry for this poor bitter tortured sadsack” tactic is just a fancy variant of the “bitches be crazy” defense. Except, I’m sorry, how is it that I’m the nonsensical crazy one when I’m not the person who is saying straight-up NOT TRUE STUFF? Oh right. I’m a woman, and women who say things that people don’t work are crazy. Right. The ancient Greeks even invented a term for it – hysteria. Somehow that slipped my mind.

Also, you know who hasn’t (to my knowledge) participated in these threads? JB Meyers. You’d think the way J Scott Campbell is reacting that I went and personally kicked his puppy. But nowhere did I ever say anything about his art, or about Mark’s art. So I’m really not sure why J Scott and Mark are getting so wound up about this when JB himself seems to be restraining from participating in this disgusting vortex of internet hate.

J Scott Campbell: I also welcome counterpoints and as long as they’re civil and respectful (more or less) and I wouldn’t delete them just because the opinions differ from my own. That’s where we are different as well.

[Pretty classic form on the tone argument there, although the equivocating means he doesn’t stick the dismount. B+ effort.] 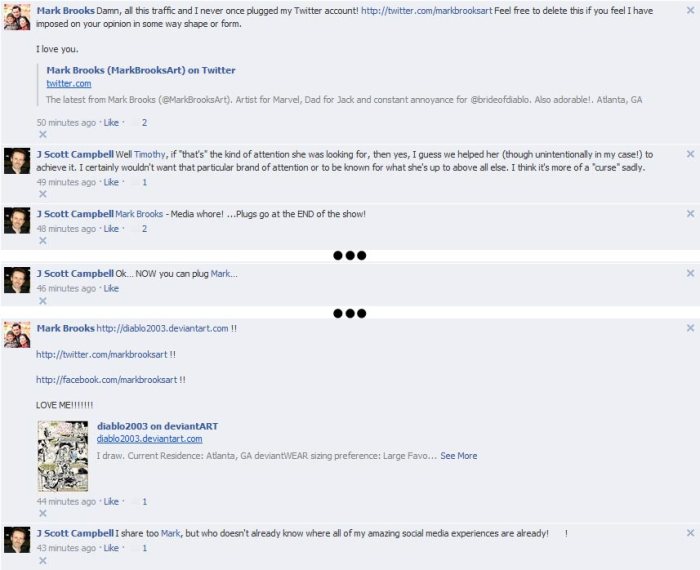 Anyway. That’s all I have for now. Since I don’t have anything more clever to end on, please enjoy these links to my favorite “male tears” GIFs. May they brighten your day. (I do apologize to my regular readers for the lack of actually important contact. But hey, you know how it is.)

23 thoughts on “Even more followup: in which the awful is doubled down”