Recently, I had reason to take a good look at the GenCon 2013 poster that was drawn by Jonboy Meyers – a comic and game artist of some note[1]. The GenCon posters have long been a source of irritation for me, as each year the design centers around a scantily-clad female mascot. But until recently, I had thought of the 2013 poster as being “not as bad” as some of the others I’ve seen:

And sure. There’s a lot wrong here. Her pose is weird and fanservice-y, the lens flare doesn’t completely obscure the fact that she’s wearing a miniskirt, and her “armor” seems to have individual boob compartments, not to mention that it’s rocking a severe case of sideboob. But bad as it is, she’s at least wearing more clothes than most of the other GenCon mascots I’ve seen? (Damned by faint praise, I know. I hope you realize just how low I’ve set the bar by now.) But then I took a really good look at it and realized, holy shit. There’s actually a lot seriously, seriously wrong with this picture.

So first, a drawover just to illustrate what’s going on underneath that overly-decorated-but-not-at-all-protective leather chestplate: 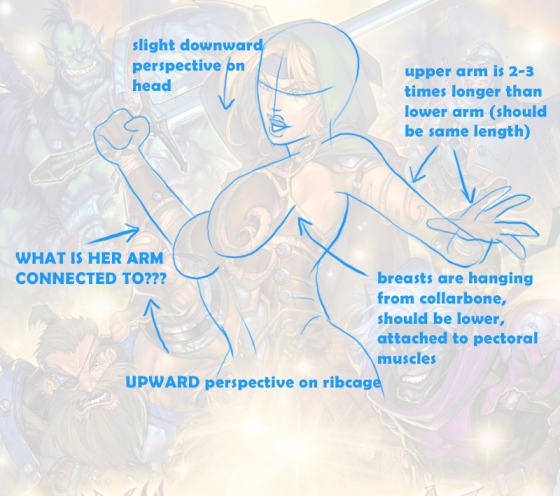 YIKES! Her breasts are weirdly enlarged, torpedo-shaped, and improperly placed and her ribcage is snapped in half just for starters. Neither of her arms are the correct length – her left upper arm is waaaaay longer than it should be at the expense of her forearm. I would say the situation is reversed with her right arm, except her right forearm is overly elongated but doesn’t actually connect to anything. There is no upper arm or even a right shoulder for it to attach to! Jonboy just lazily went “meh, boob” and counted on the fact that the viewer would be too busy admiring her chest to wonder about a small thing like WHERE THE HELL DID HER ARM GO?

What really kills me is the two different perspectives. The figure is drawn so that you are looking DOWN at the top of her head, but UP at her boobs. The effect is slight, but it’s there – which would only exaggerate the required spine arch of this pose to impossible levels. But of course, with torpedo collarboobs and floating arms it’s obvious that Jonboy was prioritizing SEXAY over, you know, anatomical plausibility.

(Which, can I just sidebar a second to say how gross that is? Look at this poor lady. She isn’t a person. She is literally a collection of disembodied parts, arranged for maximal titillation and shoved together in a mish-mash of lady-shaped sexy parts. Why do so many artists think that PARTS OF WOMEN are sexier than ACTUAL WOMEN?)

Correcting the anatomy. Sort of.

So here’s the deal. I spent an embarrassing amount of time trying to do anatomically correct draw-overs of this pose and I still didn’t get it quite right. Sometimes in art, you can get something so wrong that there’s just no point in trying to fix it. You’re better off to just nuke it from orbit and start over. However, as starting over would defeat the point of this particular exercise, I did my best to persevere.

So when I started doing my corrected drawover, I discovered YET ANOTHER problem with this pose – this time with her shoulder. (The one that actually exists, not the one floating invisibly in space.) In order to be anatomically correct, you can keep the angle of the ribcage or the angle of the shoulder, but not both. In order to keep the line of the shoulder as drawn, you’d actually be looking at the figure from the side.

This would significantly change the shape of the torso. Not to mention you’d only be able to see one breast, and it would be a full on side view. (That I couldn’t draw correctly. The original lines were just too distracting. Aaaaargh.)

However, since Jonboy seems like the kind of artist who would prioritize seeing both breasts over something as unsexy as a shoulder, I figured it was okay to give up and spend more time on the 3/4 view correction.

Looking at it, there’s still some problems with my version. Her waist is too narrow, and her left shoulder actually needs to come out further – the edge should be about level with the side of her hip. (I got led astray by the original lines. They’re so hard to escape!)

However! I did manage to correct the most egregious faults. Her arms are now the correct length and properly attached! No more weirdly floating disembodied forearms. Her breasts are also now properly shaped (assuming she’s got a decent sports bra). I know I’m always bitching about basketball-shaped breasts, but torpedo-shaped breasts are just going too far in the other direction. Lastly, I  also gave her some bits of anatomy that she’d previously been missing. Like a collarbone.

Now what’s fun is if I actually combine the two re-draws. The result is… pretty interesting. 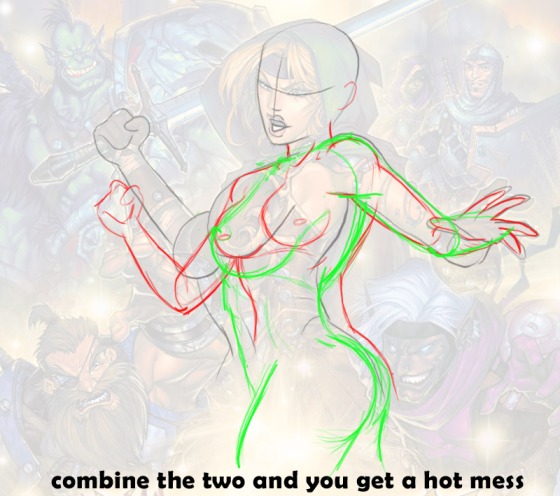 Phew! This wound up being one of my more challenging anatomy corrections, despite that I initially thought it would be easy. And of course, now that I’ve spent some time with it, I have to wonder how I could have failed to see how grossly distorted her anatomy is. I guess it just goes to show how omnipresent this sort of nonsense is in gaming culture. It just sort of becomes the background radiation that you have to put up with in order to be a gamer, which is saddening.

[1] As I avoid comics precisely BECAUSE of the type of art he makes, I have no idea if Jonboy Meyers is A Big Deal in the comics world, nor do I especially care.