Skip to content
HomeNew Liara Figure: DO NOT WANT

Or – An Open Letter to BioWare – Why this blatant pandering to the (straight) male portion of your audience represents a betrayal of your female fans.

(I realize the second title isn’t as catchy.)

I think it’s no secret that I’m a huge fan, and that I’m slightly obsessed with the Mass Effect series. I’ve been a fan since the Baldur’s Gate days, but I think you guys really found your voice with the KOTOR series and have continued to hone your craft more and more with each game. Dragon Age: Origins snags the honor of the first PC game that made me cry, and I am so in love with the Mass Effect series that I’ve finished 3 games of ME1 and 2 games of ME2 and I cannot freaking wait for ME3. (Seriously. Hurry up, please.)

One of my favorite things from Mass Effect 2 (that wasn’t FemShep) was the Lair of the Shadow Broker DLC. At the time, here’s what I had to say about Liara:

Okay. So I’ll confess that Liara wasn’t exactly my favorite character in the first Mass Effect. … But I couldn’t escape the feeling that she was a bit fetishized for male audiences since her innocence and youth were constantly played up and the dialogue between her and Shepard is decidedly awkward in many places.

So I was definitely pleasantly surprised at the transition Liara had apparently undergone between the first Mass Effect and ME2. Rather than being some awkward innocent pining after Shepard, Liara had come into her own as an independent character with her own goals – goals that didn’t necessarily align with Shepard’s. That was great in and of itself – it’s always refreshing to encounter female characters who have goals of their own rather than just being like I WANT WHATEVER THE HERO WANTS TEE HEE.

Even now that the afterglow of having finished my first ME2 playthrough has faded (at least as much as it’s ever going to), the Lair of the Shadow Broker DLC remains one of my favorite parts of the game. Liara is an awesome, competent, not-sexualized female character who has her own agenda – which is exactly what I have been asking for by writing this blog. I can’t emphasize how important the not-sexualized aspect of that is, either. See, Liara should look like this:

See? Awesome sci-fi female character in a non-sexualized pose displaying emotion that’s not OH GOD PLZ SAVE ME HALP or I AM TEH SEX.

But that doesn’t mean that she shouldn’t also look like this:

But not this. Never ever this:

WHAT THE CRAPPING CRAP. THIS IS NOT MY LIARA AT ALL.

Seriously, what the hell is it? What is this pose? Her back is arched, her ass is thrust out, and she’s squeezing her tits together to make her cleavage look huge – none of which, I might add, will help you aim better. In fact, I’m going to go on a limb and say that it would present a bit of a handicap.

Honestly, let’s do a little comparison between Liara in the game and this b.s. Liara statue: 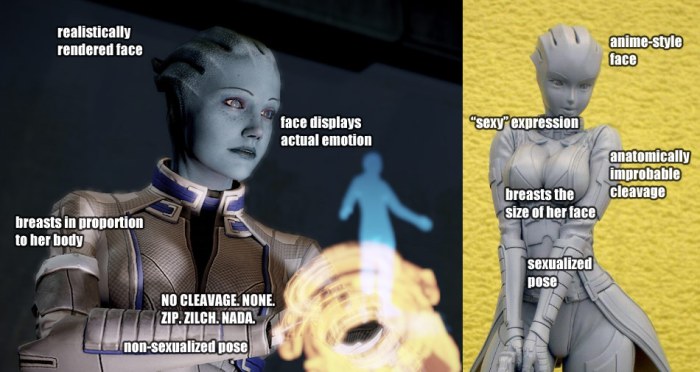 So what happened? Were your male fans upset that Liara wasn’t sexy enough? Because I just don’t understand this blatant pandering. Even after you said that FemShep would only be on the collector’s edition cover of ME3, I was still encouraged and elated that you were making such a step at all. You’ve been talking with your fans this time around – letting us choose the FemShep we wanted on the cover, promising a FemShep trailer… It made me think that you were maybe, finally turning over a new leaf.

And then this. I feel upset. I feel angry. I feel betrayed.

I mean, come ON! You guys aren’t Atlus, here.

You said on your facebook page that you wanted to know what we thought of this statue? Well comments are closed, otherwise I would have commented, but I hate it. I hate the design, I hate the concept, I hate everything it represents.

I think the most upsetting part of all is that I can’t refuse to vote with my dollar because there’s nothing else to vote for. This kind of pandering is the sort of bullshit that tells us female fans that we do not count, that we are not welcome. This Others us, pushes us to the margins. And I can’t even ‘take my ball and go home’, because there’s nothing to go home TO. As angry as you make me, as upset as I am with you, you’re the folks who make games that insult me the least.

So, come on, BioWare. I don’t want to be this angry with you. You guys are masters of your craft. The art, the writing, the game play – you guys are industry leaders in all of these things. When are you going to see that you don’t need bullshit sexism to push your titles? Your games sell because they’re good games, and anyone who says that they’re not going to buy ME3 if it doesn’t have enough hawt T&A in it is lying. Anyone who has played ME1 and ME2 is going to buy ME3 because we know it will be awesome and we want more Shepard.

Please, I implore you, if you sell a Liara statue – make it something true to the design and the character that you created, not this dumbed down, sexualized version of an awesome character just so you can make a quick few bucks. BioWare, you’re so much better than this.

65 thoughts on “New Liara Figure: DO NOT WANT”