I spend a lot of time complaining about all of the sexism fail to be found in the gaming world, so it’s nice every once in a while to have something to point at as an example of things done right. So BioWare, I know I get down on you for your sexist character designs and for your refusal to promote female avatars as an option in your advertisements. But I can’t stay mad at you forever because you gave me FemShep, possibly the best female character in the history of video games ever.

First off, I can’t say how much I love that FemShep isn’t Barbie, like the vast majority of video game women. For one thing, she’s not terribly busty unlike Miranda or Samara, which is awesome. She’s slender, sure, but kicking ass burns a lot of calories. I guess it’s a sad statement about the state of game design when a female flagship character with a flat-ish chest can make me so happy, but there you go.

That’s not to say FemShep is dowdy. So I love it even more that her feminine attributes are never blatantly on display like… well… this: 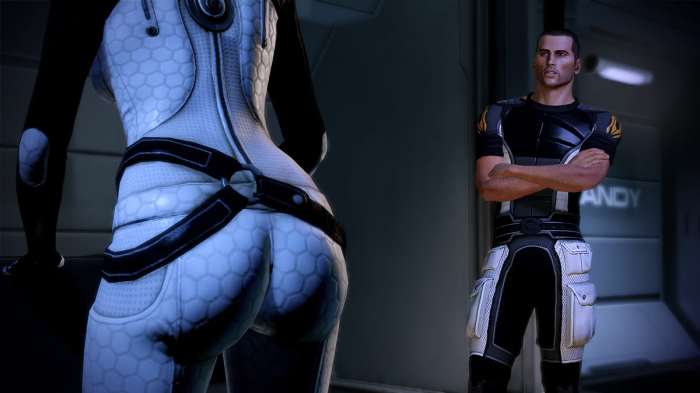 About as subtle as a brick to the face.

Thank god that they never inflicted that indignity on FemShep. It was bad enough having to put up with Miranda going on about how her looks were part of her genetic modifications designed to “give her an edge”, and it was worse getting shots of Miranda’s ass cleavage or of Jack’s bizarre nipple straps. No, FemShep is definitely female, attractive, and so not on display for your benefit. (Which, of course, makes some male gamers unhappy. To them I say, grow up. You got Miranda, Samara, and Jack. Don’t be ungrateful.)

This is a woman who doesn’t take any guff; she’s out to kick ass and take names:

In a way, it feels to me like FemShep is the realization of the wasted potential found in so many ass-kicking video game women like Samus and Lara Croft. FemShep is not Barbie-fied supermodel who kicks ass in revealing clothing so that male gamers can have their violence with a side of tits and ass. And while the option exists for her to have sexy moments if you pursue a romance, that romance is still on her terms. This isn’t any of the Metroid games, or Dead or Alive, or Tomb Raider. FemShep’s nudity is never a reward for the gamer – it’s part of her story.

As a side note, it is nice to see that the option for romance is still there for FemShep. It would have been easy to make her “one of the boys”, yet another woman who divorces her gender as the price for being a high achiever in a traditionally male role. Sure the romance options were a bit lackluster in the first game, but they certainly made up for that with a vengeance in ME2.

Perhaps the thing I love more than anything else about FemShep is that she’s the boss and everyone knows it. No one ever questions her ability to lead, no one ever makes any suggestions that maybe someone else should be in charge. FemShep is a born leader with the ability to inspire those around her. Despite being surrounded by hyper-competent people, many of whom like Tali, Garrus, or Mordin are leaders in their own right, it feels right that FemShep is in charge. 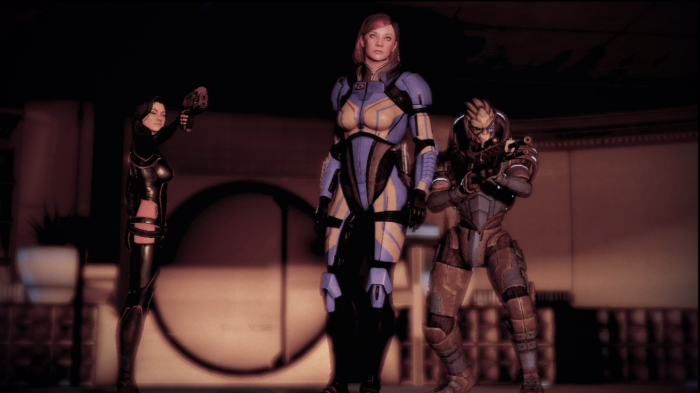 She never winds up playing second fiddle to her team members because in the end it’s all about helping her get the job done. And, ohmigod I can’t possibly articulate how much I love BioWare for this. Honestly, sitting right here I can’t name a single female video game character besides FemShep that is 1) not sexualized 2) in charge and 3) the main character.

And all of this is improved by the massive amounts of choice the player gets in deciding the fate of the universe. FemShep is a character whose decisions affect the entire galaxy, again not a role that you often see female characters in. And she gets to do all manner of epically awesome things. FemShep isn’t just a person – she’s a force of nature. So when people ask me what exactly it is that I do want in games? This. I want this. More of it. A lot more. 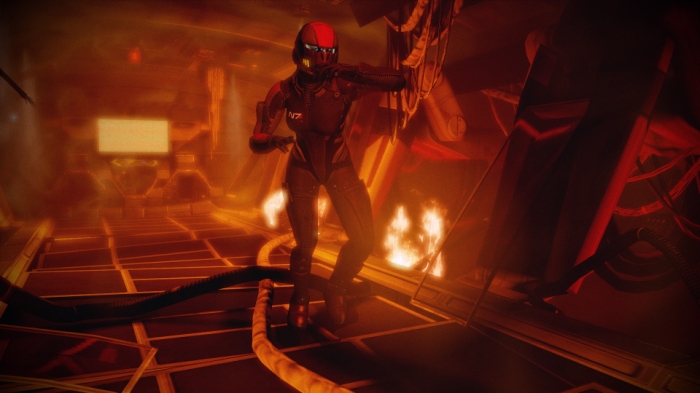 With all of this in FemShep’s favor, I can’t imagine why anyone would ever play Male Shepard. Male Shepard is such a stereotyped character – the white space marine messiah figure with a buzz cut and a chiseled jaw. Yawn. That trope is just so tired these days. Give me a female messiah figure who manages to be feminine and still save the universe – way more interesting. The comparison is even more lopsided when you start comparing voice acting. Jennifer Hale’s performance as female Shepard is amazing. Mark Meer is totally bland and uninspiring.

So you’ve got some pretty high expectations to live up to for the third game, BioWare. In the past two games, FemShep has gotten to do some seriously awesome things like kill an ancient machine-god and come back from the dead. Let’s make this a hat trick and not ruin the streak with gratuitous FemShep sexiness, okay? Okay.