Skip to content
HomeFrom the mailbag: things I wouldn’t have caught on my own.

[Before I get started, a brief personal note: So I’m unemployed again (long story, don’t want to go into it) and I’ve been moping. Yes, childish, whatever. Now that I’ve had a good mope, I’ll get back to updating. I’m incredibly embarassed that this is only my fourth post this month. To whit, I’ll make sure that I get up another post this weekend, despite my usual policy of not posting on weekends. And I will post more frequently afterwards, though I can’t say that I’d manage a return to three posts a week.

Also, I have been reading comments. I just don’t feel like I have a lot to say in response right now. That is all.]

So I’ve been getting a lot of email lately from people who have been forwarding me stuff that I would have missed otherwise. I tagged these emails but hadn’t really found an opportunity to use them, so I thought I’d go through more recent emails and pull out the best (worst?) things people have sent me lately.

First up, this link to a feature on the Top 10 Embarrassingly Bad Moments in Video Games. And of course, what roundup of video gaming’s most embarrassing moments would be complete without sexist advertising? Specifically, check out numbers 10 and 4: 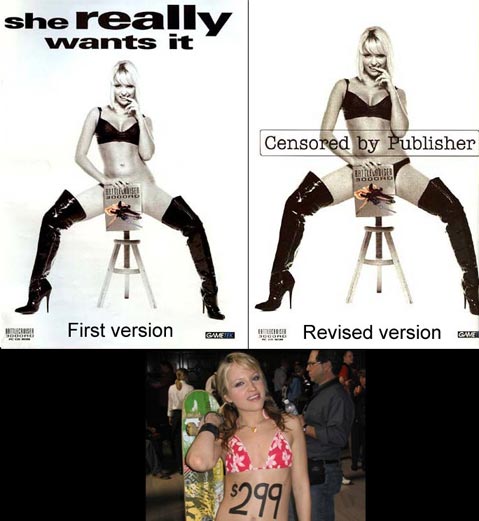 Okay, let me just burst some bubbles. As a woman who games, I have never, ever wanted to have sex with a video game. Sorry, guys, that’s just the way it is. Also, I’m pretty sure that even if I was a heterosexual man, a woman in a bikini top with a price painted on her stomach would not induce me to spend money on any product. Ever.

Of course, sometimes getting real women to show off their bits in order to make you money gets inconvenient. Which is why game companies often just get their digital women to do that for them. After all, digital women won’t complain about being stereotyped or mistreated, right? Free-to-play MMOs are all about this, since they don’t really make much money up front. (It’s all about the micro-transactions, people. Think about how many Hello Kitty outfits you could buy for your custom avatar with the fee for a professional model!)

My brother sent this to me, saying that he thought I could “rage about it amusingly”.

Alas, I hate to disappoint but I find my rage is somewhat tired these days. Okay sure she’s mostly naked. And yes we have a great case of crotch-centric logo-placement that is about as subtle as a brick. And okay, she’s pretty anorexic and might be missing part of her ribcage. But I have to say, TERA has really lowered the bar for me. I mean, her boobs are covered, even if it’s only with a tube of fabric. And while she might not be wearing any clothes, she is at least not contorted into anatomically impossible positions designed to show off both tits and ass. Also, there aren’t any other mostly-naked women nearby that look about to initiate some kind of pirate lesbian sex, which is also a huge improvement over TERA.

So all in all, I’ll give it a 6.5 out of 10. Is it sexist? Yes. But come on people. Vanilla sexism just doesn’t cut it anymore! We have to move with the times.

Which brings us to our next goody from the mail bag… I guess game companies are getting jealous of how Hollywood is systematically murdering all of our best childhood memories (I’m looking at YOU, X-Men: The Last Stand!), because that’s the only way I can explain this:

So what we have here are new designs for Harley Quinn in the upcoming Arkham City game, as compared to Harley Quinn from the excellent cartoon series. And, man. I’m mad on Harley’s behalf here. The animated Harley was an awesome character, but the Arkham City Harley? She just looks like a wannabe bad girl with a goth fetish, too much plastic surgery, and industrial-strength corsets. (Seriously? How does she get cinched in that far? I want to pass out just looking at her!)

And this kills me! Animated Harley wears full-body spandex for crying out loud. How insane are game developers when they look at a woman wearing nothing but spandex and think “you know, she’s just wearing too much clothing”. Only in the gaming world, I swear.

Next up… okay I’ll admit I’m sort of cheating since this isn’t directly gaming related. But it’s irksome enough that I figured I’d cheat, since this is (after all) my blog: 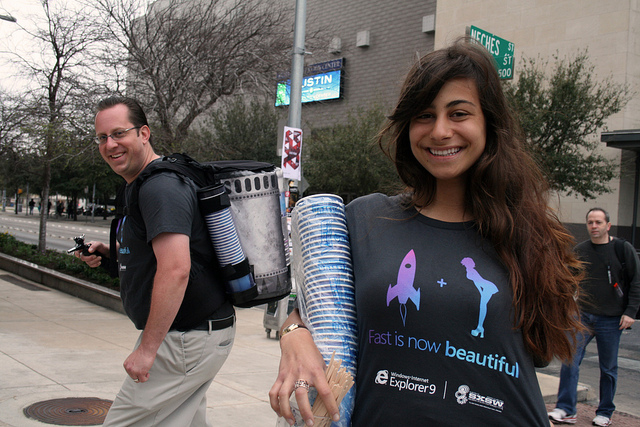 Thanks, Microsoft. Please do continue to perpetuate the stereotype that the only people who care about technical things are men. (Straight men of course.) Because the tech/gaming world doesn’t have enough casual sexism floating around. So thanks for reinforcing my decision to never use Internet Explorer for anything ever.

I mean, okay. They’re not putting an IE CD case in front of a naked vajayjay, but… still. Grow up, guys.

I wanted to finish up with something not crappy, or at least something I think is not crappy. But then, I might be biased since it features a very brief interview with yours truly. Recently I got emailed about being interviewed for a podcast about the portrayal of women in video games that was being done as a project for a university game design course. Once I stopped laughing at the idea of anything I say having a bearing on someone’s grades, I was quite happy to do the interview, and I think the end result is pretty cool. I was especially amused at how they compensated for my lack of a webcam, since it is a video podcast.

Anywhoo, the link is here. It’s only about 6 minutes, so I suggest giving it a listen.

9 thoughts on “From the mailbag: things I wouldn’t have caught on my own.”