>[Edited: True20 is the system behind Blue Rose, not Blue Roses.]

All right. So I’m going to shut up about Soul Calibur IV for a while and turn my sights back to tabletop roleplaying for a moment – specifically Green Ronin publishing. Green Ronin has published some pretty popular games like Mutants & Masterminds, Blue Roses, and the new Dragon Age RPG. Still, they command a much smaller piece of the RPG pie than either Wizards or Paizo.

Now, the problematic trend that Green Ronin displays with their products isn’t so much about cheesecake as it is about representation. Witness, the True20 cover – the system behind their popular Blue Rose RPG: 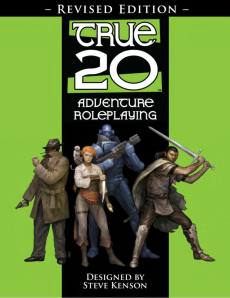 Check it out! She’s got clothes on! And pants! And isn’t overly sexualized! Which is great and awesome, but she’s also outnumbered three to one by male figures. And Green Ronin doesn’t really try to even the score with the covers of their True20 supplements either:

So out of 21 figures on these five covers, only 6 are women. 7 if you want to be charitable and call the ninja a woman since the gender is ambiguous. That means that women account for between just over a quarter (uncharitable) and a third (charitable) of figures on these covers. Which, for a system that touts itself as being about “adventure roleplaying” is very disappointing. So, women don’t go on adventures? (And yes the female Indiana Jones has a ridiculous case of sphere-boobs that are bigger than her head. Whatever. We’ve seen worse, so… moving on.)

It gets even worse when you look at the covers of Mutants & Masterminds products: 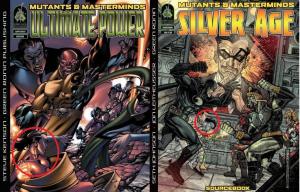 Out of 30 figures with a discernable gender, only 7 of them are female! That’s even LESS than a quarter! And of the seven female figures, only two of them could be called focal to the illustration – as opposed to the True20 covers where at least the female figures had equal weight with the male figures in terms of cover real estate.

Now, Green Ronin is known as a fairly “trad” publisher, and trad gaming isn’t always the friendliest place for women. But still – it’s hard not to look at these covers and get the message that these are games for telling stories about MEN. Men having MANLY ADVENTURES. Which is kind of sad. I love superheroes, and I love adventure stories, but the exclusion leaves me kind of cold here.

5 thoughts on “>Because clearly women don’t have adventures”